Learn how to structure your bids for the most optimized bidding strategy.

In addition to your ad group's default bid, you can place custom bids on specific sites, apps, and channels. This allows you to structure your bids in a hierarchy from broad (ad group default bid) to specific (sites and apps). 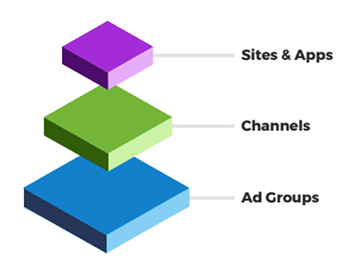 TIP: Broadly bid on each ad group, then fine-tune your bids more granularly as you learn how specific sites, apps, and channels perform for your campaign.

If neither the channel nor the site or app has a custom bid, the ad group's default bid will be applied.

1. In your ad group settings next to the Default Bid field

TIP: You can update multiple, or all, bids for Channels within an ad group to their Suggested Bids.

To customize a bid, click the bid amount to render it editable, enter a new bid, then click the checkmark to apply the change.

TIP: You can bulk update custom bids for Channels, Sites, and Apps to a set amount or increase or decrease bids by a percent or dollar amount.